This is a living, growing site. Come back often!

Arcata1.com on your desktop for a bigger view. Learn more about our city.

This is a living, growing site, with posts added daily. Come back often!

For an up-to-date, accurate view of what is going on with the Gateway plan,
here are articles, maps, transcripts of meetings, letters, and videos — as well as
commentary, editorials, and opinions.

We all want a good plan — or, better yet, an excellent plan — for the Gateway area.  The growth and future of Arcata depend on it.  It is my view that the December 2021 draft plan is an infeasible plan, and does not offer Arcata and Arcatans a realistic or beneficial future.

I am not against growth and I am not against planning.  I am all in favor of bike lanes, lower car usage, affordable housing, and equity opportunities of home ownership.  My concern is that with this plan, as it has been shown to us, it will be impossible to follow through on what has been promised.  I want a good plan, a truly possible plan, a plan that is a framework for creating what we know we can create and and have here in Arcata. Let’s move forward.

To view these articles, click or press on any of the block images below.
Your comments and views are welcome and appreciated — click here for the “Contact Us” page. Thank you.

Want to know more about Form-Based Code?  Here are more than a dozen articles.  Including the Ben Noble Form-Based Code presentation from June 29, 2022.  It’s a the full transcription and an enhanced audio track, so you can take your time, listen and read and absorb it all. With all the diagrams and examples from the video.  (The sound on the video is muffled — this sound track is improved for clarity.

Examples and critique of Form-Based Code examples, and three articles on the excellent and successful Redwood City code.

Aerial Views of the Gateway area

Here’s an assortment of aerial views of the Gateway area.  The borders have been drawn on Google Earth views, looking to the North, East, and West, from different viewpoints and altitudes.  If you have a request for a different view, please ask.

The aerial views are helpful in establishing where the Gateway area is, what its size is relative to the area of downtown Arcata, what else is near-by, what’s involved in walking from there, and so forth.

The December 2021 draft plan has a couple of location-orientation views, on Page 11.  But they are not very well done — the angle is too low,  the view is oblique, and there’s not enough area beyond the Gateway borders for the viewer to establish where this area is.
These views are better.

Which words are repeated hundreds of times in the draft Gateway plan? And which words are conspicuous by their absence? Hint: You won't find the word "sun" or "sunshine" there. Or "solar shade" or "solar shadow" either. There are over 28,000 words in this document. "House" and "Home" do not appear even once.

This is a word-cloud of the key words contained in the December 2021 draft Gateway plan.  The size of the word correlates to the number of times that word appears in the draft plan.  The two most prominent words are “development” (253 time) and “street” or “streets” (206 times).

There are over 28,000 words in the draft plan document. The words “House” and “Home”  — in the sense of a place where people would live — do not appear even once.

There’s “greenhouse gases” (7 times) and “household incomes” — 3 times mention of lower-income households and 2 of higher-income households. There’s the Arcata Play-“house” and that the Creamery building “houses” a restaurant and “houses” the Playhouse.  There are the names of the seven houses that are on the historic or potentially-designated historic list.  The word “townhouses” is in there twice, as a type of building.  Oh, and “penthouse” is there three times — twice as “luxury penthouses” and once as “penthouse units for high-income households.”

Watch the Video –Transcription of the Gateway Plan Presentation, with Comments & Opinion

WITH VIDEO -- A full transcription of the 1 hour introductory video presentation of the draft Gateway plan. With comments and opinions about misrepresentations and false information in the video.

If you were to read only one article on this website, please read this.

Yes, it is long.  All the commentary is in red and green.  You can easily skim through the article and just read the red and green — or, even shorter, you can skim and read the sidebars.

The video is one hour, but there’s a way to speed it up to make be, say 45 minutes. It’s set up so you can read the transcript and read the commentary while at the same time watching the video.

Reading this transcript will illustrate the degree of what are, in my opinion, misstatements and misrepresentations that run throughout this draft plan.  Some of them — not all of them.

Below is an image from the video with added notes.  At this time (early June 2022) we are told that we will soon have 3D modeling that will be representational of what buildings might look like, if created in line with the draft Gateway plan.

For six months now, the depiction below has been the only visualization offered to the public about how buildings might actually be constructed in the Gateway area.  Yes, this is just a possible build-out — the Gateway plan does not determine what will actually get built.  But this is what the authors of the plan gave us.  We have strong hopes that these 3D modeling images will allow us, for the first time, to see just what is being proposed in this plan.

My opinion: The video still shows 6-story and 8-story buildings in a shape that no one in their right mind would ever construct.  The purple 8-story buildings are roughly 50 feet square — needle-like towers.  The new, proposed “plaza” area is bordered on the South, East, and West sides 4-story and 6-story buildings, thus creating solar shading across the designated open space.

My primary objection to the December draft plan is that it is filled with promises and wishful thinking that, in my opinion cannot possibly take place.

It reads like a marketing brochure, not a plan. It offers little substance on such major issues as affordable housing or how 3,500 housing units could in practical terms be built.  The streetscape images shown do not resemble Arcata streets. Even its promised bicycle lanes are questionable as to whether they can be constructed as shown. To a great extent, the plan seems based on starting with a blank-slate in Arcata — that is, with all existing buildings torn down, as though we were starting with empty land.

It is my view that the December 2021 draft Gateway plan is a bogus plan and needs to be reconsidered in its entirety. 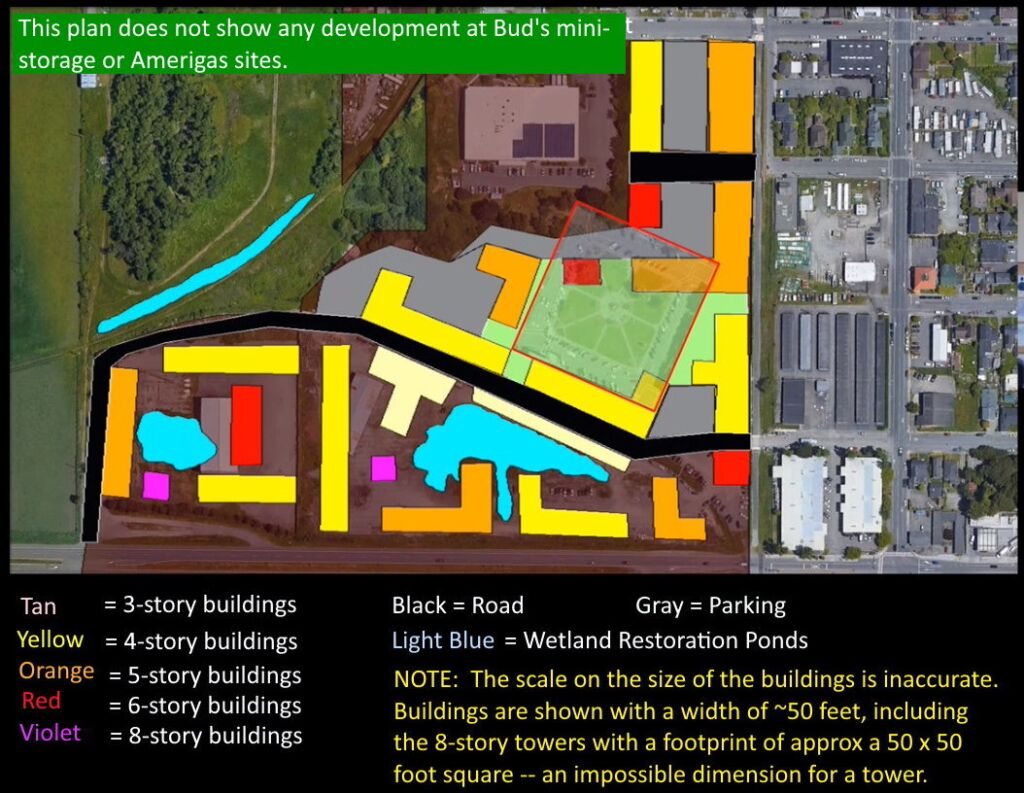 The letter from by Andrea Tuttle, PhD (environmental planning).

Excerpts: “3500 units is a mathematically-derived number. It is NOT a “factual” number that reflects the carrying capacity of the city to support such growth. It has no relationship to the ability – or desire – of the town and infrastructure to accommodate that many people.”

“Building height and scale: With apologies to the drafters, the very idea of 8-story housing blocks in Arcata is an insult. It is disingenuous to propose a plan that is dependent on unrealistic building types.”

We are all aware that Cal Poly Humboldt is seeking to expand the size of the student body. How many more students (and faculty and support staff) will be here, and how many dormitories are they planning to build? This article has the numbers.

The negative transformation of the former Arcata / Copeland / Myrtletown Lumber / Nielsen Feed site to the EdgeConnex data center was more than I could accept.  Clearly if a building like this can be allowed to be introduced into what is a thriving commercial / pedestrian area of Arcata, then all is not right with Arcata’s planning department.  Yes, I know, with whatever code is adopted as part of any new Gateway plan, a building like this could not be built in way.  But the fact that it was — when there was plenty of opportunity to make changes to the zoning for this section of 11th Street — indicates a lack of thoughtfulness on the part of the planning department.  And the “oversight” of the fence — it’s height, type, and location relative to the sidewalk are all wrong” shows us the need for more than just in-department review.

For those readers who have not yet seen it in person, I recommend that you drive / bike / walk over to 11th Street, just west of 11th & K — across the street from Portuguese Hall.  To see it in person is chilling.

Rentals Percentage in Arcata: “Do the math”

In Arcata, 63% of the housing units are rentals, and 37% are owner-occupied.  Are you concerned?  What types of new development would be required so that we would have more opportunity to own our homes? This article looks at the possibilities.  Hint: It’s not going to be easy.

In April, 2021, Arcata contracted with Planwest Partners to create a plan for the Gateway area, develop the form-based code, assist with General Plan amendments, write the Environmental Impact Report (EIR), and more.  This article looks at the schedule that accompanied that contract, and requests that the City Council have Planwest revise their schedule and deliver on the Form-Based Code.  We need to see it.

Letter from Nick Lucchesi of Pacific Builders in Arcata from January 15, 2022.

“My guess is that, should you have asked, not one person would have come up with the idea of 5-8 story residential buildings, limited car parking, traffic pattern changes, that are represented here. You have not asked us what we want. What this approach represents is a top down vision for the future of Arcata, with a belated attempt at getting buy-in from the public.”

“I am in favor of encouraging people to use cars less, but “encouraging” in this sense means providing not enough parking, so that people are essentially blocked from owning a car. Again, top down social engineering. You may encourage away, but you need to stop using that word when you mean denying people a choice.”

This Opinion article came out in the Times-Standard on December 8, 2021, very quickly after the “Draft Gateway Area Plan” was released to the public. The key points are:

The Gateway Plan: A modest proposal

Arcata’s Gateway Plan apparently includes humor and satire in its form-based code. Who would have guessed.
After all — what’s Life without a little Levity?

The Gateway Plan: A modest proposal

Aerial Views of the Gateway area